I recently visited the “39. Jahrestagung der Deutschen Gesellschaft für Sprache” (DGFS) in Saarbrücken, of which I am officially a new member (Yeah, it was about time!). The weather was terrible, it was pouring during my entire visit. Less time to procrastinate and walk through Saarbrücken, more time to listen to interesting talks. And there were plenty of them.

One talk, namely the one by Stefania Degaetano-Ortlieb’s on discourse connectors in scientific writing, inspired me to write this post. It was interesting, indeed, but I thought, connectors, schmectors, what is with the nouns of that scientific texts from the early 18th century. Almost all of them were written with an uppercase beginning letter.

I couldn’t believe it. Uppercase in English? It is like German or… actually, it seems that this is a very German pecularity. Nouns in Danish and Norwegian have used to be written in uppercase. But the practice was abolished in 1869 in Norway and in 1948 in Denmark. Remains Germany, the only country in the world expecting its kids to know and understand the difference between nouns and all of the rest of word classes. How dare they…

Back to English. I went to google ‘sNgram Viewer. The website is amazing and allows you to inspect word frequencies across time on the basis of modern and historic texts. I checked the spelling of one of the most common words: house starting at 1500 and ending in 2000. Check out what I found in the following figure. The red line represents “house” with lowercase, the blue line “House” with uppercase.

Ok, that was intriguing, so I checked six of the most common nouns in almost every language: “House, Houses, Man, Woman, Child, Children” in upper and lower case. The following figure shows you the ratio between uppercase and lowercase spellings with values above 100% indicating that uppercase spelling is in the majority.
(if you want to test it on your own, the formula was: (House+Houses+Man+Woman+Child+Children) / (house+houses+man+woman+child+children))

This supported my assumption that in the one hundred years betwen 1650 and 1750 something in the English writing world happened. The phenomenon happened in both, American English (left) and British English (right). 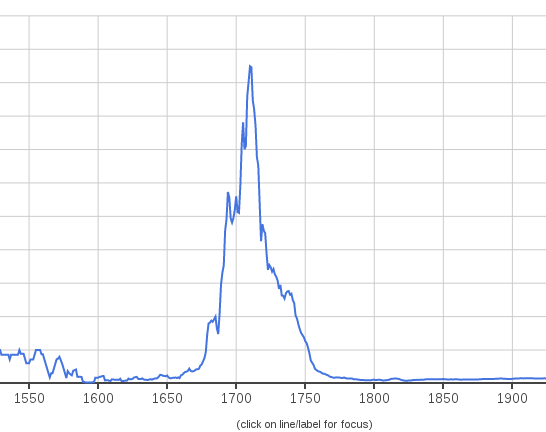 Well, that said, I had to find out what actually happened. I started with an entry on wikipedia, which was more than boring. It stated only the contemporary capitalization rules. Nothing historic. Then I googled the topic. I found roughly four million entries. Checking out the top 20, I found that none were conclusive. There exist some theories. For example, one states that the script written at that time did not allow a proper distinction between words written in uppercase, because the letters were easily confused. As a result capitalization was abolished. But that was not very rewarding, because I still urged for knowing: WHY!? Why did capitalization start and why did it end?

Most German students think, capitalization is a mean thing teachers made up to torture them. However, studies in reading show that a reader seems to benefit from capitalization as comprehension is facilitated due to the additional “cue”  (read e.g. here). But if that was really the case, I wonder why only German sticks to capitalization of nouns and all other alphabethic based orthographies don’t use it.

On google scholar I found Richard Venezky’s Book “The American way of spelling“.  Unfortunately, the entire chapter on the writing system itself was not available on google books. The library of my university does not have it in stock. I thus decided to contact Dr. Venezky, just to be informed by the email deamon that his email was not valid anymore.

I ordered the book from another library. I will hopefully find something in a couple of weeks. And if not… well, I doubt that I will work myself through historic texts on spelling.

View all posts by fabiantomaschek